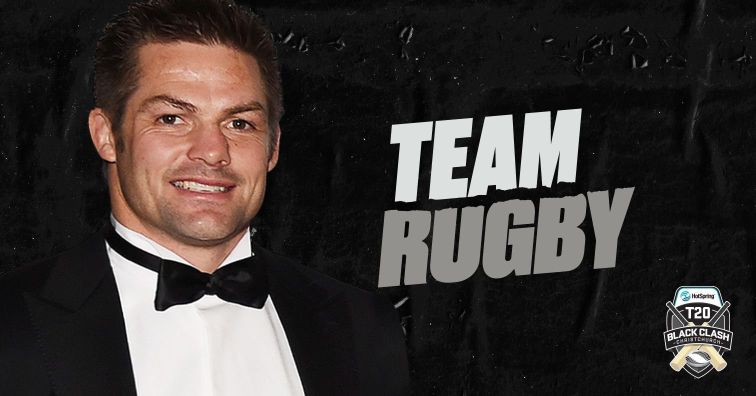 Current All Blacks captain Kieran Read will be joined by his immediate predecessor Richie McCaw in the Team Rugby line-up for the Hot Spring T20 Christchurch Black Clash at Hagley Oval on January 25.

McCaw has confirmed he will reunite with Read and his former World Cup winning coach Sir Graham Henry for the sizzling summer T20 showdown against Stephen Fleming’s star-studded line-up of international cricketers.

“I’m always up for a challenge and this certainly is a big one,” McCaw said.

“It’s a fantastic event for Christchurch and a chance to catch up with some old mates in the process, so I’m chuffed to be a part of it.”

“I don’t need to tell Kiwis what qualities Richie McCaw will bring to our team,” Sir Graham said. “The guy is an out and out winner. And Kendra has a pretty darn good record on that front, too.”

Cocksedge, who was raised in Taranaki but plays her domestic rugby in the Farah Palmer Cup for Canterbury, was a key member of the Black Ferns side that claimed the women’s Rugby World Cup in Ireland in 2017.

Cocksedge played first class cricket for the Central Districts Hinds from 2004 to 2007, and was selected for the New Zealand A team in 2007/8, before switching her focus fully to rugby.

“It’s pretty cool to be able to have the opportunity to play in the match,” Cocksedge said. “I haven’t picked up a bat or a ball for a very long time other than the back yard. But I do sit back and wonder where I’d be now if I had gone for cricket.”

A medium pace bowler and pinch-hitting opening batter, Cocksedge’s recent cricket has mostly been played in an annual Easter match alongside distant relations the Barrett brothers in the South Taranaki township of Auroa.

“The Barretts play on our team and we play against another family, the Hughes’. It’s quite good to have Jordie and Beaudy on your side. They are pretty incredible athletes.”

Team Cricket’s player-coach Stephen Fleming was thrilled McCaw and Cocksedge would be part of the event.

“It’s pretty clear Sir Graham’s strategy is to pack his side with proven winners,” Fleming said. “That’s a very smart thing to do. They’ve also got no shortage of leadership ability in that squad. I guess the big unknown is how well a few of them can actually play cricket.”

The Team Rugby line-up boasts significant cricketing pedigree, with Read having scored 190 in a senior club match as a teenager, Jason Spice having played first cricket for Northern Districts, and Israel Dagg having been tipped as a future international fast bowler by Brett Lee after bowling to the touring Australian team in a net session in 2006.

It also boasts NZU19 cricket captain Kaylum Boshier – a rare talent who made a try-scoring debut for Taranaki in a Ranfurly Shield defence against Poverty Bay in July.

“I’m very happy with the players we’ve confirmed so far – and I’ve still got a few aces up my sleeve yet,” Sir Graham said.

“We are getting the band back together,” Fleming quipped.

ChristchurchNZ General Manager – Destination and Attraction Loren Heaphy is excited with the newly named additions to the teams.

“This is going to be a real treat for sporting fans to watch. We love our sport in Christchurch and Canterbury and this event is a great way to bring our city to life and showcase it to everyone planning to come here for Black Clash.

“Hagley Oval is globally recognised as a fantastic cricket venue and there is a whole lot more happening in the city that weekend for visitors to explore and enjoy, including the Bread and Circus World Busker’s Festival and the Great Kiwi Beer Festival.”