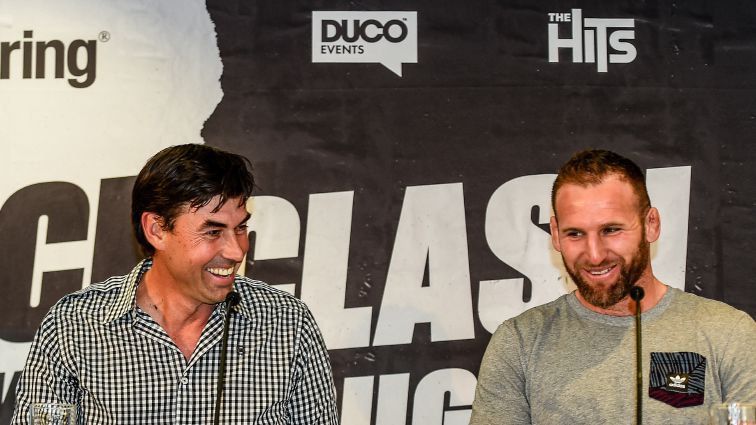 Stephen Fleming, Brendon McCullum, Kieran Read and Sir Graham Henry are among the Kiwi sporting heavyweights who will come together at Christchurch’s Hagley Oval for a truly unique sporting challenge on January 25.

Fleming has enlisted T20 master blaster McCullum to lead the way in preserving Team Cricket’s honour, while Sir Graham had no hesitation in appointing Read – an outstanding cricketer in his own right – to lead Team Rugby’s challenge.

“Some people will no doubt wonder what a bunch of rugby players are thinking in taking on the likes of Stephen Fleming and Brendon McCullum at their own game,” Sir Graham said.

“But let me tell you, there is no shortage of cricketing talent in the ranks of Team Rugby. I can’t give too much away, but I can say the team I’m assembling will be more than capable of holding its own on the cricket field. Make no mistake, we’re out to win this thing.”

“We’re putting our reputations on the line here,” Fleming said. “We know just how good the likes of Kieran and his rugby mates are at cricket. They’re exceptional athletes and many of them could have been international cricketers had they chosen another path. So we’re on high alert, that’s for sure.”

Fleming unveiled an early curve ball at Monday’s event launch, naming Scott ‘Razor’ Robertson, the two-time Super Rugby-winning Crusaders coach as team manager. “Signing Razor is an indication of just how seriously we’re taking this,” Fleming said. “He is a great motivator, and will provide some vital intel on a lot of the Team Rugby guys. That is priceless.”

Duco Events director David Higgins said he was particularly pleased to be able to take the Hot Spring T20 Christchurch Black Clash to Christchurch – a city starved of major events since the devastating 2011 earthquake.

“At Duco we’ve had tremendous success bringing major sporting events such as the NRL Auckland Nines and Brisbane Global Rugby Tens to life,” Higgins said.“But this is a sporting event I’m absolutely fascinated by.

“It’s a great celebration of New Zealand’s sporting talent at an incredible venue in a wonderful city that is well on the way to getting back on its feet again. It promises to be a captivating contest. We’ve all heard about how talented some of these rugby players are at cricket. It’s time to find out if that is true.”

As well as creating a landmark event on the Christchurch sporting calendar, the Hot Spring T20 Christchurch Black Clash event will deliver $100,000 directly into the welfare funds of the players’ associations of rugby and cricket.

“The funds allocated to the player associations will go towards their respective personal development programmes, including specific health and well-being initiatives in support of both current and past players,” NZ Cricket Players’ Association chief executive Heath Mills said.

ChristchurchNZ General Manager – Destination and Attraction Loren Heaphy said the city was excited to welcome an innovative new event to the city’s calendar.

“This will be a fantastic event for Christchurch,” Ms Heaphy said. “We have some of the world’s best athletes coming to take part in what will be a highly entertaining afternoon of cricket and sporting rivalry.

“For the crowds lucky enough to attend they’ll be treated to a great day out at Hagley Oval, widely regarded as one of the world’s best cricket venues. It is an exciting opportunity to showcase Christchurch to cricket and rugby fans across New Zealand.

“With the event being hosted on the Friday of Auckland and Nelson’s Anniversary weekend, this is also the chance to entice visitors from those regions to head along to the event and then spend the weekend exploring all that Christchurch has to offer.”

Tickets on sale, Thursday 30 August, 9am at www.ticketdirect.co.nz