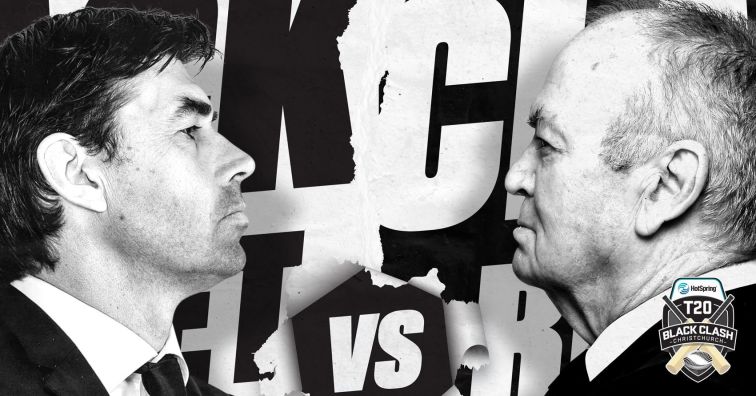 Just days after confirming his retirement from professional cricket, Black Caps 2015 World Cup hero Grant Elliott has confirmed he will return to the field as a member of Stephen Fleming’s powerful Team Cricket line-up for the Hot Spring T20 Christchurch Black Clash.

“As soon as I heard about the concept I knew I wanted to be a part of it,” said Elliott, an all-rounder who played 83 ODIs and five test matches for New Zealand.

“I was actually quite relieved to get the call-up from Flem,” he said.

Tickets for the match – which sees Fleming’s all-star line-up of international cricketers take on a team of elite rugby players coached by Sir Graham Henry and captained by Kieran Read at Christchurch’s Hagley Oval on January 25 – are on sale from today [Thursday].

Elliott - who famously smashed a six off Dale Steyn from the final ball of the match to defeat South Africa in the 2015 world cup semi-final - said he was looking forward to matching up against a team of rugby stars.

“I noticed at the launch [on Monday] that all of the talk was about rugby players who can play cricket,” Elliott said.

“Well, a lot of us cricketers actually played a fair bit of rugby in our youth, too, and we’re really looking forward to testing ourselves against these guys.

“Obviously there’s a fair bit of difference in the physiques these days though, so we’ll be out to make sure it stays a non-contact affair,” said Elliott, who was an accomplished First XV rugby player for St Stithians College in his native South Africa in his youth.

Team Cricket’s captain Brendon McCullum was also a noted rugby player who, as a schoolboy, was preferred ahead of Dan Carter in a South Island representative team.

McCullum, who also played rugby recently for the United Matamata Sports Bs in the Waikato competition, has declared his hand as Fleming’s right-hand man for Team Cricket and stated his intent to put Henry and Read’s high-powered line-up under the blowtorch.

“Let’s see how you boys go under a bit more pressure than you’re used to in your annual Christmas back yard match,” McCullum said from his current base in the West Indies.

Team Rugby coach Sir Graham Henry, however, hinted he had not yet given up pursuit of the record-smashing power hitter.

“We’re studying the eligibility rules for this event very closely,” Sir Graham said. “Brendon’s last competitive game of sport in New Zealand was in fact a rugby match. That’s all I’m going to say on the matter.”

“Jason was right near the top of the list of guys I wanted for this match,” Henry said. “While we have plenty of guys in our side who were very handy at cricket before concentrating on rugby, Jason was actually a first-class cricketer. His experience will be invaluable.”

Spice, who is one of a select group of rugby players to pull on an All Blacks jersey but never make it onto the field (he was an unused substitute in a test against Argentina in 2001) these days works as a teacher at Tauranga Boys College.

“Well, I guess I’ll finally get a chance to get out on the field with some All Blacks,” he quipped.

His status as a very nearly All Black didn’t bother him at the time, but had become more of an issue over the subsequent 17 years, with seldom a day going by without someone – usually a student – mentioning “riding the pine”.

A left arm spinner and handy batsman, Spice will be central to Team Rugby’s hopes of pulling off a massive upset against the highly-fancied cricketers. A classic niggly halfback, one of his biggest assets in both rugby and cricket was his mouth – a tool he planned to employ extensively in the Black Clash.

“You can quote me on this,” he said. “I see myself as the unofficial skipper. I’ve already told Ted that Kieran can run out first, but after that I’ll make the decisions. I’ll be sitting at first slip, nice and close.”

While Read and Spice are the only players so far confirmed for Team Rugby, Team Cricket’s line-up is well advanced, with McCullum, Elliott, Kyle Mills and Luke Ronchi joining player-coach Fleming in the side.

“It’s no surprise that we are more organised than them,” Fleming said. “Cricket is a sport that requires a tremendous amount of personal discipline and concentration. Rugby, on the other hand, seems to be more about turning up on the day and hoping for the best. It will be interesting to see how well that works for them.”

Tickets available for purchase from 9AM Thursday 30th August via www.ticketdirect.co.nz
Adult $59
Concession $35
Kids $19
Family of 2 adults and 2 kids $140
http://blackclash.co.nz/