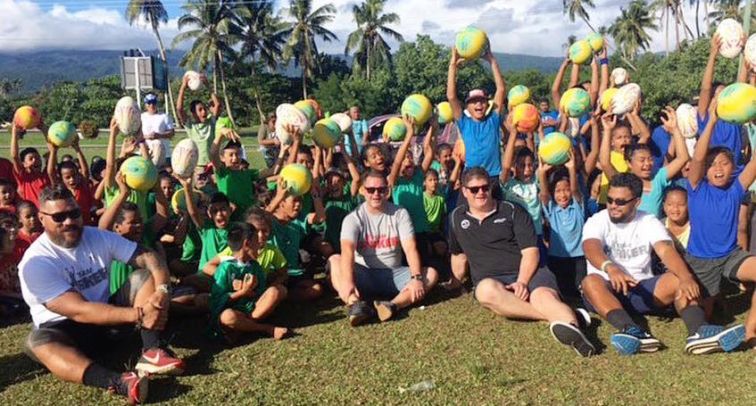 Heavyweight boxer Joseph Parker has announced the launch of Team Parker, a social enterprise aimed at increasing the access youth in the Pacific Islands have to sporting equipment.
The announcement sees the well known Team Parker brand re-positioned with a new focus. From today, Team Parker will anchor its efforts around the proven “buy one, donate one” model that has been successful for other social enterprises like New Zealand’s own “Eat My Lunch”, of which Joseph is an Ambassador.

“For every item of official Team Parker merchandise purchased we will donate a piece of sporting equipment to a school, club or community group in the Pacific Islands.” says Parker.

No longer just the brand that represents Joseph’s team as he takes on the world inside the ring. Those wearing Team Parker merchandise not only show their support for New Zealand and Samoa’s first ever World Heavyweight Champion, but more importantly contribute in a very tangible way to kids in the Pacific Islands.

Team Parker will initially focus on Samoa, with plans to extend out to other Pacific nations as soon as possible.

Joseph, who has a deep connection to his Samoan roots through his father Dempsey and mother Sala, says of the initiative: “When I see Pacific kids, I think of my parents. I think of what my parents did for me and about how little they had growing up in Samoa.

"I want all kids to have the opportunities that I had. As people of the Pacific, we have amazing talent and skills. I want to help make the benefits of sport more accessible and nurture the talent that our kids have.”

Joseph’s profile and success on the world stage combined with his deep connection to his Samoan heritage place him in a very strong position to give back to the communities of Samoa, and in time, the surrounding Pacific Islands.

The Team Parker promise is that for every item of Official Team Parker merchandise purchased, an item of sporting equipment will be donated to a school, club or community group in the Pacific. Joseph has asked business advisory firm PwC to verify the donations made every six months.

Scott McLiver, a Partner at PwC, commented that “It’s fantastic to see initiatives like this that give back to children and communities.”

To launch the Team Parker and Pass it Forward relationship, 1,000 rugby balls and netballs were donated to Samoan schools last week.

"With the support of the New Zealand public, we are proud to have donated over $245,000 in sports balls during this time. Rebel Sport has always been a brand that seeks to inspire, and believes that every New Zealand child should have the opportunity to play sport. We are very excited to partner with Joseph Parker and Team Parker, to extend this opportunity to Samoa and the Pacific Islands.”

Official Team Parker merchandise will be available for purchase online at www.TeamParker.org from 2 July and at selected Rebel Sports stores throughout the country in coming months.