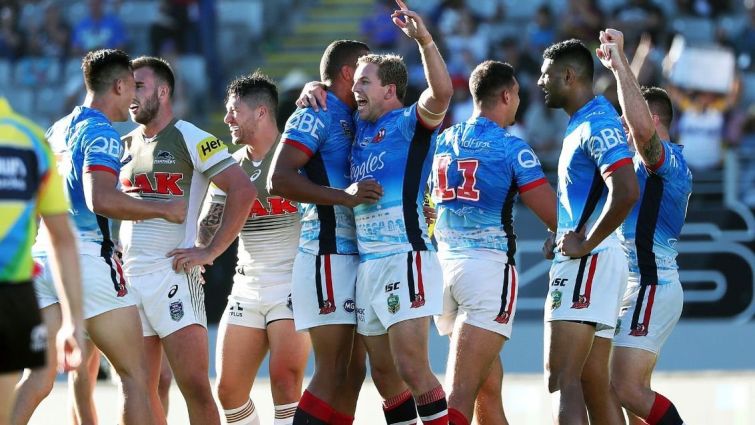 The Roosters have survived an epic second-half comeback from the Panthers to hold on for a gripping 10-8 win to claim the Downer Auckland Nines trophy for the first time.

Down by 10 points at the interval, Penrith hit back with two second-half tries and had a chance to send the game into extra time like they did in the quarter-finals, but Darren Nicholls hooked his conversion attempt.

Connor Watson did his Player of the Tournament ambitions no harm with a pair of first-half try assists in another outstanding performance by the Roosters utility.

Penrith dodged a bullet early on when Joseph Manu was denied a blade of grass short by some desperate scramble defence.

They didn't have to wait long to open their account though as tournament MVP Connor Watson threw a perfect cut-out pass to send Daniel Tupou over in just the third minute.

Watson showed he was equally adept throwing right to left as he put a spiral pass onto the chest of semi-final hero Bernard Lewis who acrobatically touched down in the opposite corner to open up an early 10-point lead at the break.

Clearly unperturbed by the half-time scoreline, the Panthers slashed the deficit to six points when Malakai Watene-Zelezniak dived over to give his side some hope with seven minutes left to play.

Manu should have steadied the ship for the Tricolours but undid some fleet-footed brilliance by dropping the ball in the process of scoring to let the Panthers off the hook.

That missed opportunity gave the Panthers a sniff, and with one minute left on the clock, the incredibly-talented Nathan Cleary produced a show-and-go in his own half that Johnathan Thurston would have been proud of to race 60 metres to bring his side within two points.

It was down to Darren Nicholls's right boot to tie up the game and send it to extra-time, but his last-gasp shot sailed wide to hand the Roosters their third heart-stopping win in a row.

This article first appeared on NRL.COM