That said, there will be no easy pathway to the finals for any of the elite 12 men’s and four women’s teams competing at the showcase season-opening spectacular at Suncorp Stadium over Friday, February 9 and Saturday, February 10.

Group A features this year’s surprise package the Panasonic Wild Knights from Japan’s Top League alongside the Melbourne Rebels, Blues and Queensland Reds.
That draw sets up a fitting rematch between the Blues and Reds following their 17-17 draw at the this year’s inaugural tournament.

There will also be a rematch between the Robbie Deans-coached Wild Knights and the Rebels – with the Rebels seeking revenge after being sensationally upset by the thrilling Japanese side 17-12 earlier this year.

Star-studded French heavyweights Section Paloise (Pau) – whose line-up will feature former All Blacks Conrad Smith, Colin Slade, Jamie Mackintosh, Benson Stanley and Frank Halai and former Wallabies skipper Ben Mowen – have been drawn in Pool B alongside the defending-champion Chiefs, the Highlanders and the NSW Waratahs.

“The wildcard will be Pau for sure,” Waratahs star Kurtley Beale said. “I’m sure Conrad Smith will lead these guys and look to have a good tournament."

Queensland Reds star James Slipper said he was relieved his team had avoided Fiji and the rugged looking Pool C.

“We’ve got a tough pool but I am pretty excited about it,” Slipper said. “I was a bit worried we’d end up in Pool C with the Fijians.”

The 117KG prop said he had a great time playing in this year’s tournament and was looking forward to having another crack at it in February.

“I had a lot of fun last year. It was a new experience for me. I’m not used to having that sort of space on the field.”

The four-team women’s pool was also drawn into slots that will determine the order of their fixtures. The expanded women’s event will feature a full round robin between the Brumbies Women, Melbourne Rebels Women, Queensland Women and New South Wales Women’s teams.

“Today’s draw underlines the fact that rugby fans are in for a spectacular experience in 2018,” tournament chief executive Rachael Carroll.

“The men’s competition will be just as action-packed and thrilling as it was earlier this year, while the expanded women’s tournament will be a real highlight.

“Once again, the action on the pitch will be sensational. And the move to a Friday-Saturday, day-night format means the stands will be fizzing.

“There’s no doubt the Brisbane Global Rugby Tens will be the biggest party in Queensland in 2018.”

“With the official draw made, we expect to welcome tens of thousands of Australian and international fans to Suncorp Stadium next February to witness a weekend of thrilling rugby rivalry,” Ms Coddington said.

“We invite visitors to stay and play in Brisbane and the surrounding regions, home to a wide variety of unique and memorable visitor experiences from our islands and beaches, such as Moreton Island and Stradbroke Island, to lifestyle offerings like dining at one of Brisbane’s world-class restaurants.

“The Brisbane Global Rugby Tens is one of many events we support and features on the It’s Live! in Queensland calendar, forecast to generate more than $780 million for the state’s economy in 2018.”

“Last year’s Brisbane Global Rugby Tens coincided with a spike in New Zealand tourism, with annual holiday visitation from our neighbours rising by more than five per cent to 51,000 people.” 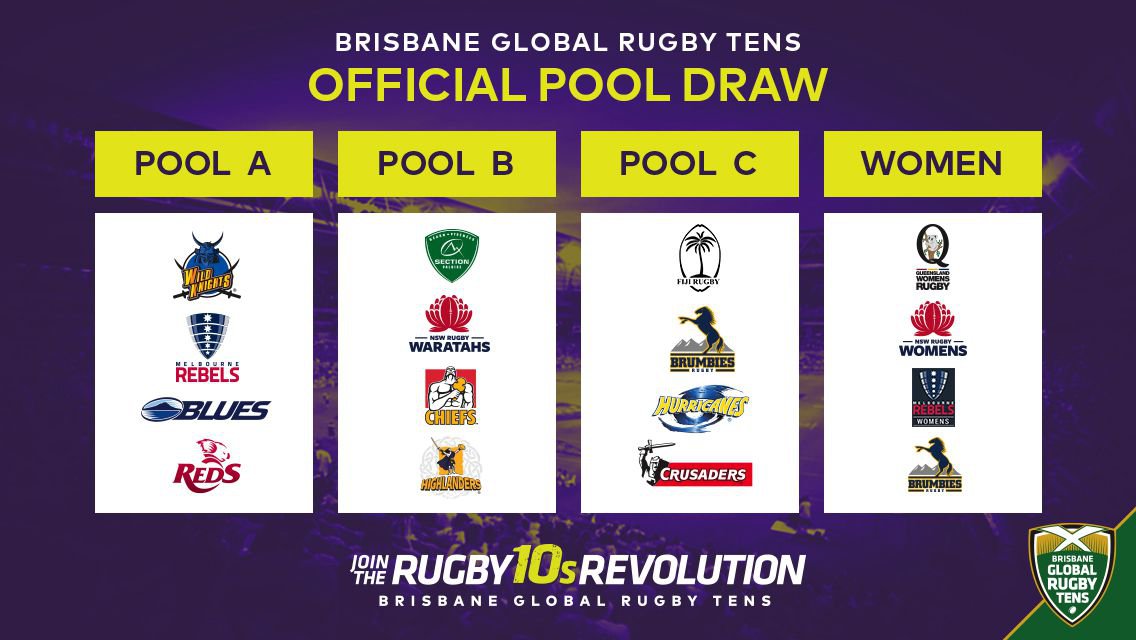 Spencer back in blue for Brisbane Tens