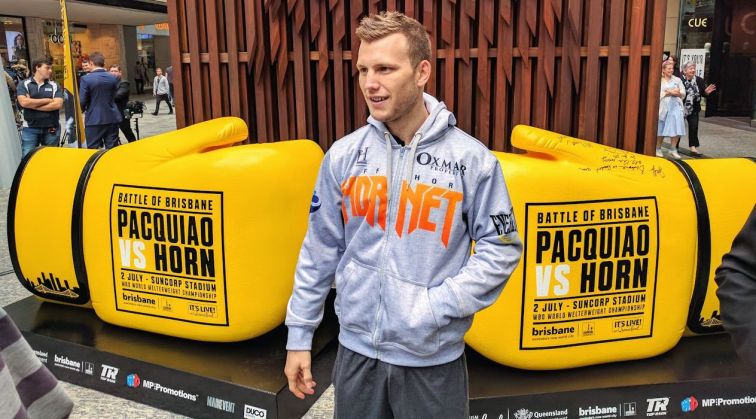 Brisbane’s boxing schoolteacher Jeff Horn will sweat it out this Thursday in a special public training session that will bring the Battle of Brisbane out of the stadium and into the city.

Beginning in Reddacliff Place at midday, Jeff Horn will duck, weave and jab with coach Glenn Rushton, followed by a Q&A session, Battle of Brisbane giveaways and more intense training with local and international legends of the sport who will compete as Sunday's undercard such as Russia’s Umar Salamov and Queensland’s own ‘Shotgun’ Shannan O’Connell.

At the centre of the preview will be a pair of giant 50kg boxing gloves on which fans can sign messages of support.

Brisbane Lord Mayor Graham Quirk said Thursday will be the perfect opportunity to get behind our home-grown athlete and see him just days before the world title match on 2 July.

“It’s a coup for Jeff Horn to go head to head against the reigning world title holder Manny Pacquiao and I encourage all boxing fans to come to the training session and throw your support behind our local champion.,” he said.

“The Battle of Brisbane is expected to deliver an economic impact of more than $23 million for Brisbane and will put a global spotlight on our new world city.

“The scale and calibre of the match and public demand are a testament to Brisbane’s growing reputation as a destination for live events.”

The Battle of Brisbane is set to be the largest boxing match staged in Australia with more than 44,000 tickets already sold and, for the first time ever, the capacity of Suncorp Stadium increased to meet high demand.

Battle of Brisbane will be televised to 150 million viewers worldwide, including the United States where the fight will be available live to ESPN’s 94 million subscribers.

Minister for Tourism and Major Events Kate Jones said the strong national and international interest in the Battle of Brisbane reflected the strength of Queensland’s event calendar.

“This fight is a highlight on the state’s major events calendar but more than that, it provides an opportunity to raise Queensland’s profile in many of our key international tourism markets, including South East Asia,” she said.

Jeff Horn said he was thrilled to meet the fans in the lead up to the match.

"I grew up in Brisbane so it's a huge honour to be able to compete on our home soil in front of a full stadium," he said.

"I've been training harder than ever and meeting the fans this Thursday will put a fire in my belly before I take on the world title on Sunday."

The WBO Welterweight World Title match was secured by the Queensland Government through Tourism and Events Queensland (TEQ) in partnership with the Brisbane City Council through Brisbane Marketing.

Battle of Brisbane is promoted by DUCO Events and Top Rank.

For more information or to purchase tickets to Battle of Brisbane, www.battleofbrisbane.com.au

Anthem Singers announced for the Battle of Brisbane